Thoughts on the Story of the Unjust Steward

At the heart of his gospel Saint Luke presents us with a  collection of four parables (Luke 15:1-16:8). They come in two pairs. We have a parable about a man (a shepherd with a lost sheep) matched with a parable about a woman (a housewife with a lost coin). Following those we have a parable about a father with two very difficult sons. That’s the parable that we usually call “the Prodigal Son,” although of course it’s as much about the elder brother who was not a prodigal as it is about the younger who was. And that parable is matched with the parable that the church, or at least those parts of the church that follow the Revised Common Lectionary, appoints to be read as a part of Proper 20 in Year C: a parable about a master with an unsatisfactory manager, or “steward” as the older translations generally have it.

But these four parables have something more in common than that they stand together at the heart of Luke’s gospel. In fact, they have quite a lot more in common. To begin with, in each, the story involves a happy reversal of fortune. Something is wrong, and it is put right. A lost sheep is rescued; a lost coin is found; two sons who both seem likely to lose their father’s love are instead held fast in it; and a steward with whom his master was angry in the end receives his master’s approval.

What’s more, in none of these parables does the one who is “lost” or “out of favor” appear to do anything much to merit being “found” or “restored to favor.” Luke introduces this factor so gently by his arrangement that at first we hardly notice it.  Thus, in the stories of the sheep and a coin: well, we know (or think we know) that sheep are pretty stupid and coins are just coins, so we are not too surprised that their redemption does not seem to involve much moral or physical effort from them. But that sets us up for the parable of the Prodigal where the two sons, who are, after all, capable of rather more than sheep or coins, both behave pretty badly and yet are held fast. They, too, seem not to deserve their own redemption. Yes, I admit the prodigal does make the effort to come home. But then, we must surely remember just why he does that. “How many hired servants of my father’s have food enough and to spare,” he says, “and here am I perishing with hunger!” (Luke 15.17). In other words, he doesn’t decide to come home because he is sorry for what he did, or has seen the error of his ways, but because he is hungry. That, as we say, is the bottom line.

All that then brings us to the story we call “the unjust steward,” and here the gospel lets us have it with both barrels. The steward is, we are told, accused of “squandering” his master’s goods. The Greek word for “accused”– diaballein — usually means “falsely accused” or “slandered,” and despite the implication of a number of our translations, and even some commentators who in my view ought to know better, that is how we ought to understand it here. The steward has been acting honestly and competently enough, but he is slandered. And his master accepts the slanders, without even asking his side of the story. “I’ve heard bad things about you,” he says. “So hand over your accounts! You can’t be steward any more.”

As a result the steward sees himself faced with two possibilities. Quite possibly he will be sent to the mines, a common punishment for slaves who fell out of favor, and one leading to a life that was nasty, brutish, and generally short (as he observes, “I cannot dig”). To avoid that possibility, he might choose to run away and “beg”: a miserable fate, not to say a risky one, for runaway slaves, if caught, were often crucified.

The steward has, however, one last shot to fire. Falsely accused and convicted without trial, he will at least give himself the satisfaction of getting even, and even perhaps make for himself a few friends in the process. What’s more, he will get even in a particularly satisfactory way. He will revenge himself by actually doing exactly what he has been accused of doing. He will “squander” his master’s goods!

So, while he still, so to speak, has keys to the office and knows the passwords to the computer, and quite reckless of possible consequences, he contacts his master’s debtors, and allows them to re-write their IOUs, reducing their debts in some cases by a quarter, in some by as much as half.

And the master, who condemned the steward when he was falsely accused, and who has now really been robbed – slaps his hand on his thigh, roars with laughter, and applauds the steward for his wit!

And that is the end of the story. No repentance, no moral, nothing.

This is a strange world indeed. It appears, to tell the  truth, to be a world without morals, where proper behavior results in disaster, and barefaced robbery results in approval. So what is going on? 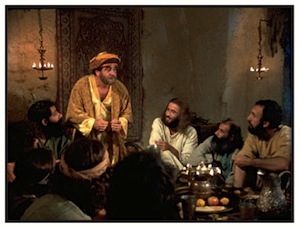 To answer that we must, I think, consider the situation in which Luke sets our four parables. They stem from a single beginning: “Now the tax collectors and the publicans were all drawing near to Jesus to hear him. And the Pharisees and the scribes murmured, saying ‘This man receives sinners and eats with them.’”   In other words—Jesus seems willing to put up with bad people and even to keep company with them! And the Pharisees object. What then? The first three parables in our collection, says Luke — the stories of those stupid sheep and useless coins and obnoxious sons who are all, nonetheless, sought after and valued – those ‘parables of the lost” as we sometimes call them were all, says Luke, addressed to the very Pharisees who criticized Jesus, to those who objected to him spending time with those whom they regarded as lost.

But then comes this fourth parable, with its world verging on moral chaos. And this, says Luke, is addressed to Jesus’ disciples: in other words, to a group of folk who presumably did approve of Jesus spending time with the lost; a group that might well therefore have thought that in Jesus’ eyes, they must be better than the Pharisees. So we must say that they — or, if we regard ourselves also as Jesus’ disciples, perhaps we should also say we — we, specifically, are the ones to whom the parable of the unjust steward is addressed. We are the ones whom our Lord specifically confronts with this world without morals, where proper behaviour results in disaster, and barefaced daylight robbery results in approval.

Does that surprise us?

Why should it? What kind of world do we expect?

Do we think that because we are followers of Jesus, because we are Christians – maybe even because we are, as we think, the right sort of Christians – do we think that means we shall find a world where we shall always be approved for our well doing and condemned when we cheat? Do we? Do we think perhaps that because we have resolved as Christians to try to live a good life and do the best we can to love God and our neighbor, in whatever particular way God calls us to – do we think perhaps that that means that we shall find a world where we shall always be approved when we do right, and condemned when we don’t? I don’t know why we should. It didn’t happen to Jesus. In fact, it didn’t happened to a lot of God’s saints. It didn’t happen to Martin Luther King or Dietrich Boheoffer or Elizabeth of Hungary or Perpetua and her companions or Paul or Peter or Moses or Job or all sorts of people I could think of.

The truth is, the universe as we experience it may well not treat us in ways that fit our notions of love and justice, and we had better face it. And indeed if we cannot – if we cannot deal with our own misfortunes, how shall we reflect on the Holocaust, or Mogadishu, or Ethiopia, or the Mayan Indians, or the Native Americans, or the poor children in Breslan, or the helpless men and women and children who are being killed daily in Syria and Iraq and Israel and Palestine? Indeed, how shall we even meditate on a crucifix?

If you have raced with those on foot says the prophet, and they have wearied you, how will you compete with horses? (Jer 12:5)

Or shall our Christianity become a self-centred quest for our own self-fulfillment, which can ignore the world’s pain so long as it is not our pain?

The steward in the story did well and was slandered. Then the steward cheated and his master applauded. Does that mean that it is all right to be unjust? Of course not! And to make that clear Luke follows the parable with a set of sensible moral exhortations as pointed and plain as you could wish (16:9-13). Use wealth justly and generously and you’ll reap spiritual benefits. Be faithful in little things. You cannot serve God and money. And so on. But Luke only does this after the parable has reminded us — in case we had forgotten — that we shall be very foolish indeed if we expect the universe to keep to those maxims.

So much in the short term.

And in the long term?

Well — the truth is that we are all unjust stewards, and shall be. So God defend us from a universe where we shall always be approved for our well doing and only for our well doing, and condemned when we cheat — for in such a universe, I am damned. What I mean is this – that if, at the last, any of us are to stand at all before our master, then far from affecting shock or displeasure, we had better recognize that we are actually going to need something like that surprising approval of which the parable of the unjust steward finally speaks; that surprising approval which cannot be accounted for on the basis of good deeds; that awesome and surprising approval, that divine favour, entirely unbiased by our merit, which we call grace.