Listening to the Bible: The Art of Faithful Biblical Interpretation (2013)

With an appendix on liturgical reading by David Landon 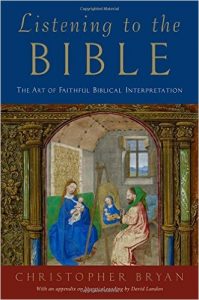 Bryan traces the history of modern approaches to the Bible, particularly historical criticism, noting its successes and failures. Basing his work on a wide knowledge of literature and literary critical theory, and drawing on the insights of the greatest literary critics of the last hundred years, notably Erich Auerbach and George Steiner, Bryan asks: what should be the task of the biblical scholar in the 21st century? Setting the question within this wider context enables Bryan to indicate a series of criteria with which biblical interpreters may do their work, and in the light of which there is no reason why that work cannot relate faithfully to the Church. This does not mean that sound biblical interpretation can ignore the specificity of scientific or historical questions, or dragoon its results into conformity with a set of ecclesial propositions. Bryan argues, however, that interpreters of biblical text cannot ignore its existence in the community of faith; and that although textual interpretation has scientific elements, it is, ultimately, an exercise in imagination.

In the book’s final chapter, actor-director David Landon explores some techniques of oral delivery of scripture.

“Elegant, nimble, AND ABOVE ALL SANE!  I could wish to be still teaching so I could assign it.”  -Robert W. Jenson, Senior Scholar, Center of Theological Inquiry, Princeton (ret.).

“This is a powerful, cultured, serious, and passionate invitation to the reader to discover the potential fruitfulness that awaits us all when biblical scholars recognize the critical importance of their work for the worshipping, believing community; and when the preacher sees clearly the centrality of the scholars’ task as s/he ponders the word of life today.  As with all Christopher Bryan’s work the immensely readable, engaging style is a huge plus.  Whether telling an anecdote or analyzing a dense academic argument, the prose is always limpid and compelling. The invitation to the reader to enter something of Bryan’s world with its broad range of literary and cultural reference is just that – an invitation – and has the potential to open the reader to new vistas.” –Fr. Peter Allan CR, Principal, the College of the Resurrection and the University of Sheffield

“Christopher Bryan addresses the confusion of at least two centuries over how to interpret the Bible: whether it is to be taken as literally accurate in its historical and scientific statements, whether it has a fuller meaning for Christians than for secularists, or whether it is to be understood by any of the great variety of techniques employed by those who are considered scholars in the field.  In doing so he has performed an enormous service to the church, offering the great clarity in a short volume that only deep erudition can achieve. Then, to top this off, he adds observations on the oral reading of scripture by David Landon, Professor of Theater at Sewanee. If I were still teaching either New Testament or Preaching in a seminary, I would make this a required textbook for my courses.” – O.C. Edwards, author of Elements of Homiletic: A Method for Preparing to Preach

The Resurrection of the Messiah (2011) 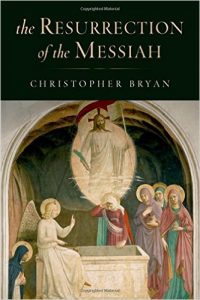 ryan combines literary, historical, and theological approaches in this study of the Resurrection. Throughout his learned yet elegantly written book, he exhibits a willingness to face hard questions, as well as appropriate reverence for the faith that over centuries has enabled millions of people to lead lives of meaning and grace.

“Bryan offers not only an elegant and erudite exposition of what the NT says about Jesus’ resurrection and the good grounds for believing it but also a survey of numerous ancillary areas.” —The Catholic Biblical Quarterly

“This is an exciting contribution to the literature and immensely readable. It is particularly strong in presenting the Gospel texts as performed text and in exploring some of the questions provoked by such a reading, with reference to classical and modern exemplars. Bryan has a large appreciation of the way theatre works and his references to both Greek drama and Shakespeare are effective and illuminating. The breadth of reference throughout is stimulating and heartening in a work that also pays such close attention to text.” — Father Peter Allan CR, Lecturer and Vice-Principal, the College of the Resurrection, Mirfield.

“Christopher Bryan constructs straightforward, consecutive and easily traceable arguments, and writes strikingly clear prose — with an occasional touch of whimsy. These are uncommon virtues in the academic world. Indeed, he has actually hewn a good read through the dense exegetical thickets that scholarship has cultivated around the Resurrection-the thorns and brambles are there for those vocationally committed to dealing with them, but relegated to the plentiful footnotes.” — Robert Jenson, Senior Scholar, Center of Theological Inquiry (ret.)

Render to Caesar: Jesus, the Early Church, and the Roman Superpower (2005) 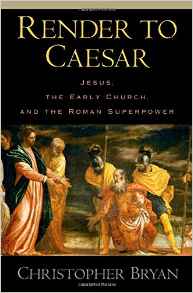 How did Rome look from the viewpoint of an ordinary Galilean in the first century of the Christian era? What should this mean for our own understanding of and relationship to Jesus of Nazareth? In Render to Caesar, Christopher Bryan reexamines the attitude of the early Church toward imperial Rome and transforms our understanding of early Christians and their relationship to Rome, demonstrating how Jesus’ teaching continues to challenge those who live under structures of government quite different from those that would have been envisaged by the authors of the New Testament.

“The interface between the gospel of Jesus and the empire of Caesar has suddenly become a hot, and disturbingly relevant, topic in biblical studies. Christopher Bryan’s new book, full of his characteristically shrewd and original observations and scholarly insights, cuts across much current thinking and raises questions which cannot be ignored, either by historians or by those keen to rediscover the relevance of the gospel in today’s world.” — N.T. Wright, Bishop of Durham and author of the three-volume Christian Origins and the Question of God.

And God Spoke: The Authority of the Bible for the Church Today (2002) 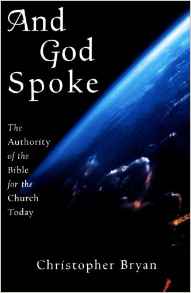 Christopher Bryan looks at the nature of the Bible’s authority and inspiration and how the Bible can inform our decision-making today. He explores common questions about scripture, such as: What do we mean when we say that the scriptures are revelatory, that they are inspired, that they are the Word of God? How do we define the Bible’s authority for the past and the future? What does a church that takes the Bible’s authority seriously look like? How does it read, study, and pray with the Bible?  And God Spoke was among the books chosen as commended reading for the bishops at the 2008 Lambeth Conference, as well as being among the study books used by the international Education for Ministry program.

“This is a well written, carefully reasoned presentation which will be helpful to both clergy and laity who struggle with how to interpret what they read in the scriptures in the face of the factions, sectarian and divisive, which claim an absolute authority of interpretation, usually their own.” (The Anglican Journal )

A Preface to Romans: Notes on the Epistle in Its Literary and Cultural Setting (2000)

Bryan approaches St. Paul’s letter to the Romans with a number of aims in view. First, he wants to show which literary type or genre would have been seen by Paul’s contemporaries as being exemplified in the letter. He also attempts to determine what we can surmise of Paul’s attitude and approach to the Jewish bible. The study involves discussion of and comparison with other literature from Paul’s time, place and milieu, including other writings attributed to Paul.

A Preface to Mark: Notes on the Gospel in Its Literary and Cultural Settings (1997)

The first examination of the Gospel of Mark as a whole in the light of contemporary studies of orality and oral transmission, A Preface to Mark not only shows us Mark in its original setting, but also suggests ways in which our own encounter with Mark’s text may be significantly enriched. Its accessible style will serve as a good introduction to the Gospel for students as well as the general reader.

“A good introduction to Mark for both students and general readers….As interesting as it is informative.” (Choice)

Way of Freedom: An Introduction to the Epistle to the Romans with Study Guide (1975)

Buy on Amazon Buy on BN.com