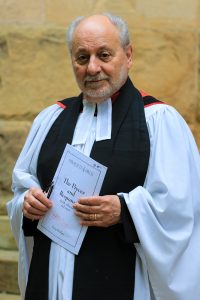 The following extracts are adapted from Donald S. Armentrout, “Christopher Bryan: A Biographical Note.” In Biblical Imagination: Essays in Honor of Christopher Bryan. Edited by Ellen Bradshaw Aitken. (The University of the South, 2006)

Christopher Bryan was born in London, England, the only son of William Joseph Bryan, a British soldier, and Amy May Bryan. He spent his childhood and early adolescence in London, a period that included the whole of World War II. He still retains vivid memories of the outbreak of war in September 1939, the London Blitz (1940-1941), and subsequent events such as the dropping of the first atomic bomb.

He received most of his primary education from Saint Michael’s (Church of England) Primary School in Star Street, near the Edgeware Road. After taking the “eleven plus” examination, he was awarded a place at Saint Marylebone Grammar School, which he attended from 1946 to 1954. Major influences on him during this period were the poet T. E. Blackburn, who was his form master for a good part of the time, and who taught him that poetry matters, and the historian T. K. Derry, who taught him that precision in scholarship matters.

Christopher Bryan is a sometime Woodward Scholar of Wadham College, Oxford.  He matriculated in 1954 and went on to graduate successively in the Honour Schools of English Language and Literature (1957) and Theology (1959). Throughout this period, the works of C. S. Lewis and Charles Williams were—and continue to be—major influences on him. 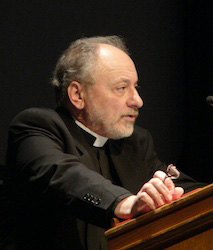 Bryan’s formal religious life had begun as a teenager when he was confirmed and subsequently joined with enthusiasm the activities of a thriving Anglo-Catholic parish in London—Saint Mark’s, Marylebone Road. Bryan is clear about his indebtedness to this Anglo-Catholic beginning. Father John Crisp, who was vicar of St. Mark’s for most of this time, remains to this day his model of what a pastor should be. Bryan says, “He is, quite simply, the finest parish priest I have ever known.”

As for Anglo-Catholicism, Bryan says, “Christ came to me within the Anglo-Catholic tradition. There Christ called me, and there Christ has blessed me. While I have over time come to appreciate and value some aspects of the Reformation, it remains that Anglo-Catholic liturgy, Anglo-Catholic concern for social justice and the poor, the Anglo-Catholic tradition of coming daily to God’s table for the Eucharist, the availability of confession, joyful acceptance of the prayers and fellowship of blessed Mary and the saints – these things, by God’s grace, are the basic furniture of my ecclesial home, and, in this life at least, I cannot imagine why I should ever either abandon or replace them.”

Bryan studied for the priesthood at Ripon Hall Theological College in Oxford. He was ordained to the diaconate of the Church of England by Mervyn Stockwood, Bishop of Southwark, in Southwark Cathedral on Trinity Sunday 1960, and to the priesthood on Trinity Sunday 1961, at which liturgy he was honoured by being the appointed gospeller. He served until 1965 as assistant priest at St. Mark’s Church, Reigate, in the county of Surrey. These were happy years under the kindly and helpful guidance of the vicar, the Reverend Neville Martin. Bryan enjoyed and felt fulfilled by pastoral ministry, and at that time saw his future life and ministry as that of a parish priest, no doubt somewhat after the model of his beloved Father Crisp. 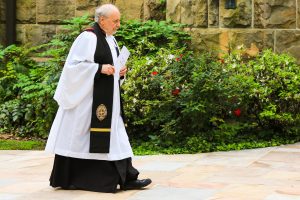 Following these years in parish ministry however, in 1965 Bryan was appointed Tutor in New Testament at Salisbury Theological College, where he would serve until 1971, for a while as Tutor and subsequently as Vice-Principal. During the greater part of this time the Principal of the college was Canon Harold Wilson, undoubtedly one of the most important and far-seeing educators in the Church of England during the twentieth century (see further, “Prin: A Reminiscence” in “Posts” on this website.) Harold Wilson had a great influence on Bryan, and certainly helped to make him aware of his calling to work as a priest-scholar and theological teacher rather than in full-time parochial ministry, while at the same time making him aware that such vocation would always be pastoral and priestly as well as intellectual and academic. As Bryan himself would later say to his students, “To be a professor of religion you must be a serious academic and sound scholar. To be a priest-theologian or a priest-scriptural-scholar means that you don’t get off any of that, but you must also always be attempting to lead the life of faith, which is to say a life of prayer, obedience, and pastoral care for those around you.”

In 1972 Bryan married Wendy Elizabeth Smith, only daughter of Jack Egbert Smith and Joan Dickinson Smith. They have subsequently lived in Alexandria, 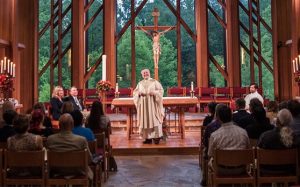 Virginia, in London, in Exeter, and in Sewanee, Tennessee.  They also have family in the Czech Republic—Peter, who is Wendy’s brother—and in Centola in southern Italy—Benjamin, who is also Wendy’s brother, his wife Giuseppina, and their son Michael.

During the years following until the present Bryan has taught at various times in the Bahamas, Britain, Canada, Haiti, Israel, South Africa, Turkey, and the United States. From 1974 to 1979 he worked as education officer in the diocese of London, and from ’79 to 1983 as part time faculty and chaplain at the School of Education in the University of Exeter, where he completed his PhD. He began teaching at the University of the South in 1983. From 1991 to the present he has edited the Sewanee Theological Review (formerly the Saint Luke’s Journal of Theology), one of the only two Anglican journals of theological reflection at present published in the United States. In 2000 he was appointed to a chair, as C. K. Benedict Professor of New Testament at The University of the South. In 2006, Ellen Bradshaw Aitken of McGill University in Canada, his former student, edited Biblical Imagination: Essays in Honor of Christopher Bryan, a Festschrift on the occasion of his seventieth birthday. In October 2012, in recognition of his services to the church and the academy, the University of the South awarded him the degree of Doctor of Divinity, honoris causa.

Now in “semi-retirement” (whatever that means) Bryan continues to write, both non-fiction and fiction, to teach, and to serve the church as a priest. His most important non-fiction books are The Resurrection of the Messiah (Oxford, 2011), Render to Caesar: Jesus, the Early Church, and the Roman Superpower (Oxford, 2005), the popular And God Spoke: The Authority of the Bible for the Church Today (Cowley, 2002) (which was among the books commended to the bishops at the 2008 Lambeth Conference) and most recently Listening to the Bible: The Art of Faithful Biblical Interpretation (Oxford, 2013), with an appendix on liturgical reading by his friend actor-director David Landon. Bryan’s novel, Siding Star, was published in December 2012, and in December 2012 was given a starred Kirkus review (the Kirkus star indicating “books of exceptional merit”). In December 2013 Siding Star was named to Kirkus Review’s Best Books of 2013.  Peacekeeper, a sequel to Siding Star, was published in December 2013; a third in the series, Singularity, came out in December 2014; the fourth, A Habit of Death, in December 2015; the fifth, The Dogleg Murders, in October 2016; and a sixth, Black Ops, in October 2017.

Among Bryan’s continuing personal delights, besides reading and writing, he lists cooking and eating with Wendy and friends; dogs; theatre, especially Shakespeare; and opera, especially of the eighteenth and early nineteenth century. He is, in a small way, an actor himself, and in the semi-professional setting of the University of the South’s Theatre department is particularly proud of having played Gloucester in King Lear, Boyet in Love’s Labours Lost, Peter Quince in A Midsummer Night’s Dream, Lord Lafew in All’s Well That Ends Well (February-March 2015), and most recently, the Narrator in Neil Simon’s The Good Doctor (October-November 2016).