Thoughts for the Fourth Sunday in Advent, 2016.

This morning’s gospel passage is from the first chapter of Matthew’s gospel. If you know your Bible you’ll know it’s preceded by what Matthew calls “an account of the genealogy of Jesus the Messiah”—or, as the old KJV translated it, “the book of the generation of Jesus Christ” (Matt. 1:1-17). We don’t ever read it in church these days, because it seems unreadable. Look at it and I think you’ll see why! It traces Joseph’s family tree all the way back to Abraham, hundreds of years, and consists mostly of Matthew saying, “so-and-so was the father of so-and-so,” and so on through what he claims are forty two generations. Actually, when you count them it rather seems as though he’s only managed forty-one, which leads us to an old joke among seminarians: that Our Lord probably called Matthew to stop being a tax collector because Matthew couldn’t count! Being merely a disciple you didn’t need to be able to count!

What is really strange about this genealogy, however, is that although it is very carefully arranged with this monotonous list of fathers and sons—just as you’d expect in that patriarchal age—on four occasions it actually mentions someone’s mother: namely, Tamar, Rahab, Ruth, and a woman whom Matthew calls “the wife of Uriah.” And what’s odd about these mentions is that they all involve something scandalous. Tamar deceived Judah to get him to have sex with her. Rahab was a prostitute. Ruth was a foreigner, a member of the despised Moabite race. And “the wife of Uriah” was Bathsheba, who was seduced into committing adultery by King David, who then tried to cover up his adultery by having her husband murdered. Not a pretty story!

And yet, Matthew claims—and of course, he has the whole of the Old Testament to back him up—through all these oddities and scandals and disgraces, God was working God’s purposes out.

At the end of Matthew’s genealogy the evangelist says, “Joseph was the husband of Mary, of whom was born Jesus, who is called the Christ,” or “the Messiah” (Matt. 1:16). And that brings him, and us, to the passage we heard for this morning’s gospel: “the birth of Jesus the Messiah,” in which Matthew proceeds to tell us the story of yet another scandalous oddity: to be precise, how Mary was found to be pregnant before she had had sexual relations with Joseph, to whom she was engaged.

Joseph, not unnaturally, is taken aback. He is minded to “put her away,” as was his right, and some might even have argued his duty, under Jewish law. Mary could, if the matter had been pursued 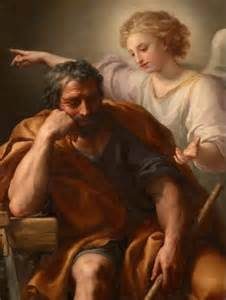 rigorously, have been stoned as an adulteress, since that was still technically the penalty for adultery. But then Joseph receives the message of an angel:“do not be afraid to take Mary as your wife, for the child conceived in her is from the Holy Spirit.”

And this perhaps is the first thing to say about this morning’s gospel, the passage of Scripture with which we mark this final Sunday in Advent. For us, after two thousand years of Christian history and reflection, the nativity of Our Lord from the Blessed Virgin Mary is a beautiful story of maiden piety and faithfulness, rewarded by a grace that shall henceforth make Mary “blessed among women” (Luke 1:42). But who on earth would have believed such a story at the time? Would you? Would I? For us had we been there at the time it would surely have been a matter of shame and disgrace, and possibly of Mary’s being stoned to death for adultery.

And yet, Matthew tells us, through this particular scandal, as through all those earlier scandals, God was still working. Indeed, through this particular scandal God was working to bring about a supreme miracle, greater than creation itself: the miracle of Christmas, the miracle of the incarnation, wherein, as St John would put it later, “the Word became flesh, and dwelt among us” (John 1:14).

In other words, God is not afraid of scandals and oddities and upsetting of the normal order of things, and even works in and through them. God is not neat and tidy. Even when things seem to us to have gone utterly wrong, it will be a mistake to despair–just as it would have been a mistake to despair in those terrible hours on Calvary, on the first Good Friday, when Our Lord died as a condemned felon, and all surely seemed to be lost.

Two more things we are reminded of by today’s gospel.

First, the angel tells Joseph that he is to name the child whom Mary shall bear “Jesus”—that is, in Hebrew, “Yeshua,” which name means, “God saves” or “God delivers” or “God sets us free”. Sets us free from what? Surely from many things! We all have our sins, our failures, our addictions and weaknesses, all those things in the light of which we may well ask ourselves, how can we dare hope to be accepted by God Who is holy and pure and good? Will we not be struck down at once? The name of Jesus reminds us that God in Christ came to us, binding the divine glory to our sinfulness, precisely so that our sinfulness might thereby be bound to God’s glory: so that we might indeed be set free from what oppresses us. Jesus came for the forgiveness of our sins. Or again, as St. John would put it a few years later, “God so loved the world, that he gave his only begotten Son, that whosoever believes in him should not perish, but have everlasting life” (John 3:16).

Second, the angel says to Joseph that the young child shall be called “Immanuel, which means, God with us.” It is—and I seem to have been quoting this story rather a lot lately, but it is certainly not unsuitable for Advent—it is, as the writer to the Hebrews said, “a fearful thing to fall into the hands of the living God” (Heb. 10:31). But it is also, as famous British biblical scholar used to say, a good deal less fearful than the alternative. However fearful may be the prospect of God’s judgment, the prospect of a universe without judgment, and therefore of a universe without meaning and without hope is surely a good deal worse. Here then is the final Advent message, the final promise on this the last Sunday of Advent: that the God who comes to us in judgment, the dread king whom we must face upon the throne, has a human face, a face of compassion and mercy, the same compassion and mercy that he showed to sinners two thousand years ago: and it is the face of Jesus Christ. Jesus is God with us, our Immanuel. Even so, Matthew will record Christ’s promise in the final words of the gospel where, triumphant over death and the grave, Jesus tells his followers, “lo, I am with you always, even unto the end of the world” (Matt. 28:20).