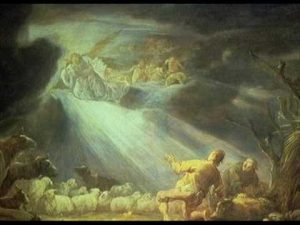 But who is afraid at Christmas? And especially who among us, who are among the well-fed and well-housed people of the world, and are free to worship as we choose?[2]

Christmas for us is a time of celebration: a time for family and for children, a time for those who’ve been scattered to come together. And there’s surely nothing wrong with that. But what has fear to do with it?

What of those whose celebration of Christmas 2016 is not very different in spirit from the Yule celebrations of our pagan forebears, coming together for good cheer in the coldest and darkest days of the year to remind themselves that Winter would not last for ever and in time it would be Spring again? What of those for whom Christmas is simply about parties and eating and drinking and kisses under the mistletoe and having fun? Surely there is nothing wrong with that either. Why shouldn’t people give each other what comfort they may? But again, what has fear to do with it?

What of those like us, who gather in churches and listen to the Christmas story? Surely we are the most fearless and comfortable of all? We are those who know the stories and say the prayers. We listen to the words of the angel aware that the narrative is beautiful and it is part of our tradition. And again, there is surely nothing wrong with that. Why shouldn’t we enjoy a beautiful story? But again, what has fear to do with it?

One answer to all these questions is I suppose that we all carry our fears around with us, whether we admit it or not, or even know it or not. Deep fears, inescapable fears, fears from which not even our celebrations and our parties and our church assemblies can deliver us, though they may help us to evade or forget them for a time. We fear getting old and lonely. We fear losing our health and wits. Several people have told me lately how they fear for the future of our society and where those who lead it will take us. Worse still, we fear the secret darkness inside ourselves that no one but us knows about, and what that darkness might lead us to do. We fear the grave, which none of us will escape. In short we are, like the shepherds near Bethlehem, surrounded by darkness.

Is that, then, what the angelic “Fear not!” addresses? Is it the darkness and uncertainty of life that surrounded the shepherds and surrounds us?

As St. Luke tells the story, it is precisely the opposite. Certainly he begins with the shepherds in darkness, “abiding in the field, keeping watch over their flock by night.” But in that situation they seem quite comfortable, even tranquil. Luke’s Greek, which might perhaps better be translated, “keeping the night watches” suggests ordinary folk working together, going about their business with quiet efficiency. (Various commentators suggest that Luke’s choice of phrase—φυλάσσοντες φυλακὰς—implies that the shepherds work in shifts to look after their flocks.)

Fear of God is, say the Scriptures, the beginning of wisdom. Fear of God is the fear in comparison with which all other fears become trivial or meaningless. “If you know the right thing to fear,” the Chasidic rabbi told his student, “there is no need to fear anything else.” Or as Nicholas Tate and Nahum Brady put it in their hymn,

Fear Him, ye saints, and you will then / Have nothing else to fear.

So when the shepherds were filled with fear at the sight of God’s glory, they were not wrong in their reaction. On the contrary, they were right. They were awake. They were in health. For theirs was the fear, the one true fear, which is no sooner embraced than it is done away.

And that is exactly what happened.  “Fear not!” the angel said, and continued: “For see, I am bringing you good news of great joy: to you is born this day in the city of David a Saviour, who is Christ the Lord.” And in that word they could rejoice, and did rejoice, and forgot their fear, and went to Bethlehem to see the Christ.

The fear of the Lord is the beginning of wisdom. And the end and completion of wisdom, as the shepherds experienced it, is joy, when that fear is itself cast out by confrontation with the perfect love and eternal mercy of God.

The gospel invites us to celebrate Christmas, as did those shepherds, in the fear of God, and in so doing, to be freed from fear: from that fear, and also from all those other fears, fear of life and fear of death, that we know only too well.

In the fear of God then, let us confess our faith, as the church has taught us:

[1] The seed for this little reflection came from my reading of Karl Barth, “’Be not Afraid’” in Barth, Christmas, Bernhard Citron, transl. (Edinburgh and London: Oliver and Boyd, 1959 [1957]) 29-34. Originally published in 1929, it is one of a series of Christmas mediations by Barth that appeared in German newspapers from 1926-1933. “These articles,” as the translator Bernhard Citron points out in his preface, “are not timeless, for they have a definite ‘Sitz im Leben’ of the German nation during a period when the country went from the apparent prosperity and comparative peace of the mid-twenties rapidly through a period of depression, unemployment and threatening civil war to its surrender before Nazi dictatorship. However the message conveyed here is for all times and all nations, the message of true Christmas over against disbelief, wavering and sheer sentimentality” (op. cit. 5). I agree, and I commend this little volume to any among my friends and colleagues who occasionally find themselves wondering how to preach at Christmas.

[2] Even as I read through this on St. Stephen’s Day—the day of the first martyr—I can’t ignore the fact that I have just read on the BBC website of the present sufferings of Christians in North Korea (go to: www.bbc.com/news/world-asia-38404012), where simply professing Christianity, let alone preaching it, will bring you prison and hard labour if not execution; and I realize once again how lucky we are who live in societies where we are still permitted to to profess our faith without penalty.