Thoughts on the Unspeakable. Text of a sermon written for St Olave’s Church Exeter, for the 3rd Sunday of Lent

On television this week I watched an interview with a man who was at the mosque in Christchurch when the shootings happened. He 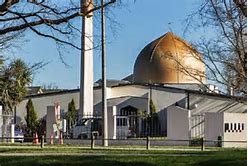 spoke about it hesitatingly for a few minutes and finally stopped, saying in effect, “I just have no words for what happened. I can’t talk about it.” Who wouldn’t sympathize? There are some things so awful, so appalling and outrageous to our every decent instinct that it is almost impossible to talk of them rationally or reasonably. We naturally call them “unspeakable”.

But does that mean we just let such things pass? That we have no questions? Surely not! Muslims, Christians, Jews—we all believe in the God of Abraham. We believe that God cares for what God has made, that God is Merciful and Compassionate. Why then does God allow these things to happen? Those fifty people in the mosque at Christchurch had come together to pray to the God of Abraham. What was God up to, that God didn’t protect such people? How do we explain such events?

One move is to say that such people were sinful, and therefore God, who is righteous, has punished them. That might seem to most of us a little hard to sustain when one of those killed at Christchurch was only three years old, but I am well aware of some who would offer such an argument. It’s the same argument as is offered in the Old Testament to Job. Job is a good man who suffers terribly. His friends comfort him by telling him he must have committed some serious sin and what he needs to do is repent and then God will make everything right. But Job is adamant. He’s done the best he can to be a decent human being and he doesn’t see why he should be treated like this. “Let God come and face me and let’s have it out,” he says, or words to that effect.

Would he contend with me in the greatness of his power?
No; but he would give heed to me.
There an upright person could reason with him,
and I should be acquitted for ever by my judge. (Job 23.6-7)

The odd thing is, God enters the story at the end of the book and God says that Job is right. God doesn’t run the world like an angry boss who clobbers you if you step out of line. Job’s friends are wrong.

All of which brings us to the gospel passage that was set for today—the passage we just heard from St Luke. Jesus and those round him are talking about two local disasters that have disturbed and distressed people. One is evidently a result of human cruelty—the Roman governor has ruthlessly suppressed and killed a group of Galilean worshippers. For some reason they’ve been regarded as a threat to imperial security and so, as we hear the story, the governor has “mingled their blood with their sacrifices”. The other is a more or less accidental disaster—a building in Jerusalem called the tower of Siloam has collapsed and killed eighteen people. They were just in the wrong place at the wrong time. How are such awful things to be explained? Apparently there are those around Jesus who use the same argument as Job’s friends: “Ah, they must have been terrible sinners for God to punish them like that!”

If so, then Our Lord utterly rejects that idea.

“But,” he adds, “I’ll tell you this: if you don’t stop thinking like that, one day you’re going to find yourselves in the same situation they’re in!”[1]

What then? Does our Lord have some better “explanation”? Actually, he doesn’t. Or at least if he does he doesn’t tell us about it. Instead, he tells us a rather strange little story about a fig tree. This tree is barren—which is to say, it’s useless. It cumbers the earth, uses up resources and produces nothing. 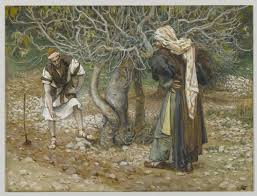 “Yank it out and burn it,” the landowner says, reasonably enough.

“Wait!” says the gardener. “Let it alone for one more year!”

Nor is that all, for the gardener himself will put some effort and resources of his own into this—“Let it alone… until I dig round it and put manure on it. If it bears fruit next year, well and good; but if not, you can cut it down.”

And there the little story ends. No certainty is offered, no promises, only a modest hope and a plea for patience.

So how are we to explain such tragedies as those we are speaking about? Well, perhaps we need to learn from the man on television who said of the Christchurch shootings, “I can’t talk about it.” Or from what we’re told of Job’s friends, who did fine so long as they didn’t say anything, but really screwed up when they started to talk. But perhaps above all we need to learn from our Lord, who offered no explanation, but only a plea for patience. The truth is, we cannot “explain” the Christchurch shootings—or Hiroshima and Nagasaki, or the Holocaust, or any of the other hideous atrocities that litter human history—and especially we cannot “explain” them if by “explain” we mean, “show how they were good things really”. They weren’t.

Why do we seek God at all? Is it because God “explains” things? I doubt it. I think we seek God because we want God. We long for ultimate love, for faithfulness at the heart of the universe. We seek God because, as the psalmist put it this morning,[2] we are thirsty for God:

My flesh also faints for you

as in a dry and thirsty land where there is no water.

The Song of Songs has it right. We seek God (and incidentally, God seeks us) as lovers. And what is the quality of love? Paul said it simply enough—“love is patient”.[3] Which brings us back to our gospel passage and the odd little story that Jesus told. If God is our lover, and we love God, then we must do what lovers always have to do, and be patient with each other. We all know—God knows, and I certainly know it!—that God has to be patient with us, with me. How about us in return exercising some patience with God?

That doesn’t mean trying to pretend that there are no problems or questions—questions such as the Psalmist asks again and again, “Why?” “Why do the wicked prosper?” questions such as Our Lord himself asks as he hangs on the cross, “My God, my God, why have you forsaken me?” But it does mean being willing to live with those questions. It means being willing to address them to God, frankly expressing our fear, our disappointment and our anger, just as the psalmist and our Lord do. One of the great mistakes we can make in prayer is to suppose that we always must be polite, however badly we feel. That is a sure way to end any relationship. Whatever we have to offer, however awful, God is presumably big enough to take it.

Being patient also, of course, means what it says: it means being patient, hanging in there! One of the most powerful moments in C. S. Lewis’s Screwtape Letters[4] is when Screwtape, writing of course from the devil’s point of view, says “our cause is never more in jeopardy than when a human, no longer desiring but still intending to do [God’s] will, looks round upon a universe in which every trace of Him seems to have vanished, and asks why he has been forsaken, and still obeys.”

So what of explanations? There’s a story I love about the great ballerina Margot Fonteyn. After she’d completed a particular dance she was asked to explain it. She looked at her questioner with that peculiarly devastating scorn that only a stunningly beautiful woman can inflict without even intending to, and replied, “If one could explain it, one would not have needed to dance it.” That first Good Friday, at the end of Our Lord’s journey to Jerusalem, Jesus died. He was the best person who ever lived, and he was crucified. What then? God did not explain the cross. What God did do was raise him from the dead. And this too, I suppose, was a kind of dance:

They cut me down

And I leapt up high,

I am the life

There is so much around us that we do not understand, and God does not explain that, either. What God does do is give us a promise through his Son: “Those who eat my flesh and drink my blood have eternal life, and I will raise them up at the last day” (John 6:54). In light of that promise we shall in a few moments approach this altar. In light of that promise we dare now to place our trust in God, in words that the church has taught us:

[1] I take Luke’s μετανοῆτε, normally translated “repent”, in its more basic sense of “to change one’s mind or purpose” (see LS μετανοέω), and I think that NRSV “as they did… just as they did” (ὁμοίως… ὡσαύτως) are the key words here. The point is, the view that “if they’re suffering, they must have sinned very badly” works well for us until we start to suffer ourselves, as sooner or later, in some measure, we all do. Thus categorizing other people’s suffering leaves us feeling safe, for it says that they are different from us (they were great sinners!) and were therefore vulnerable. Our own suffering reminds us, however, that we are like them after all, with the same hopes and the same fears. Apropos the two disasters to which St Luke’s narrative refers, we have no record of them in any extant work from the time other than his, but there is nothing intrinsically unlikely or improbable about either. The slaughter of Galilean worshipers fits well enough with the character of Pilate as presented by Josephus (e.g. Ant. 18.3.2; Jewish War 2.9.4), and I am told that ruins still exist from a collapsed tower on the south eastern wall of ancient Jerusalem, dating from about this period.

[2] In its choice of Psalm the Church of England here follows the Revised Common Lectionary. The Episcopal Church and the Roman Catholic Church appoint Ps. 103 or part of Ps. 103.

[4] C.S. Lewis, The Screwtape Letters (London: Geoffrey Bles, 1942). There have, of course, been many editions since.