Thoughts on the Second Sunday after Epiphany 2017

John the Baptist is back with us again this morning. He appears a lot during the seasons of Advent and the Epiphany, doesn’t he? Today we have part of St. John’s take on him—St. John, who always has a slightly different slant on things from the other three evangelists, and is always interesting.

“The next day,” John tells us—in the morning, that is, of a new day—the Baptist “sees Jesus coming towards him.” The evangelist’s choice of phrase is significant. He could so easily have said, “He saw Jesus walking by,” or something of that nature—as indeed he says later in this passage. But for this first encounter he says the Baptist saw Jesus “coming towards him.”

As always with John, the nuance is theologically significant. If we’ve been listening to his gospel, indeed, if we’ve been listening to the Scriptures generally, we should already know that God’s Word is always coming to the world, and the world can never overcome it. It came to the Patriarchs, to Moses, and to Israel’s other prophets. It came at the Annunciation—“the angel of the Lord brought glad tidings unto Mary, and she conceived by the Holy Ghost.” The initiative is always God’s.

And so it is here. The Word, the Word made flesh, comes toward the Baptist. And it is then, in the light of that prior gift, that the Baptist sees Jesus, and declares who he is in words that have by 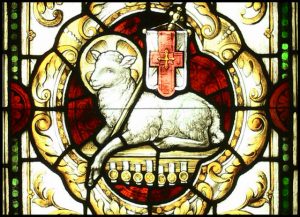 God’s grace been engraved by George Frideric Handel on the musical soul of the English speaking world: “Behold the Lamb of God, which taketh away the sin of the world!”

But just what did he mean by that?

In asking ourselves that question we find ourselves faced with another of those knotty problems that the scholars and theologians have been arguing about almost from the beginning of Christianity. Did he mean that Jesus is the true paschal lamb – something that seems to be implied later in the gospel? (i.e. 18.28). Or is he thinking of Jesus as the victorious messianic ram that we find in some Jewish apocalyptic writings? (e.g. 1 Enoch 89:41-50). Or is he thinking of Jesus as the true ram for sacrifice that Abraham had said God would provide? (cf. Gen. 22).  These and other views all have their supporters, and for what it’s worth, if I have to choose, I incline to put my money on the last—it fits best with the “Jesus the beloved Son,” that is, Jesus, God’s Isaac, of the other gospels.

But that’s if I have to choose. And I’m not sure that I do. In such scholarly controversies as these, maybe we all run the risk of getting a little too heavy.

We are of course getting too heavy if we insist that the words can only mean one thing. That is a silly idea, dating more or less from the so-called Enlightenment, and would have been quite alien to the evangelist or those who first treasured his words. They would have understood that great words can mean lots of things, and the greater the words, the more they can mean. So even if my choice is right as the main idea in the evangelist’s mind at this moment, I certainly wouldn’t rule out the presence of the other ideas somewhere in the mix of his thoughts.

And in another way perhaps we are getting too heavy in that on the simplest level the force of the image is surely clear enough. A child could understand it – and perhaps a child can understand it best. Whoever has actually seen a lamb can get it. “Lamb” speaks surely of innocence—in virtually any culture. That this is “God’s lamb” speaks also of holiness, God’s holiness, now having its epiphany, its manifestation, to the nations.

And what does this Holy Innocent do?

And what is that?

It is surely a world without sin and sin’s consequence, death. It is surely an end to alienation and fear. It is surely the gift of the joy of God’s presence! It is Eden restored, where the woman and the man are together and not ashamed, and where God walks with them in a garden in the cool of the day. Which of us, in the deepest level of our hearts, in those moments of insight when we have seen the uselessness of all the other things that we once thought might satisfy us, which of does not desire such things? Which of the world’s great faiths does not express our yearning for them – as Karl Barth observed when he said, “all human activity is a cry for forgiveness.”

And that, says the Baptist, that is the gift Jesus brings. He is God’s lamb, God’s innocent, who takes away the sin of the world, who puts things right. It is as simple as that. No one, perhaps, has put it better than St. Augustine, commenting on this very text in his unfinished contra Iulianum. Jesus takes away sins, he says,

“both by forgiving those which have been committed (among which original sin is included),

“and by helping us not to commit sins,

“and by leading us to the life where sins cannot possibly be committed.”

So we will pray in a moment, before we receive Our Lord in His sacrament. And his grace and gift so abound that his mercy and peace are thus available for us, saving us and sanctifying us.

It is, of course, a dangerous salvation and a disturbing peace that comes to us in this way, at least in the short run.  “The peace of God it is no peace,” as the hymn says. I confess I find it a dreary hymn with a dreary tune, and I groan every time we have to sing it. Please forgive me, any of you who love it! But in this particular respect at least we may agree that the hymn is right.

If we expect God’s lamb to bring us peace and wholeness as the world reckons those things, we’d better think again. God’s lamb is more likely to bring us to places we would not have imagined, people we do not expect, and tasks we do not think we need. Just when we think we have mastered the Christian life, God’s lamb will blow our pathetic vision to pieces, and compel us to look at something new. And the new vision will probably not be safe, or comfortable – at least in the short run.

But that’s in the short run. In the long run, as Peter says later in the gospel, we have no choice. “Do you also wish to go away?” Jesus asks the twelve, somewhat later in the gospel. “Lord,” Peter answers, “to whom can we go? You have the words of eternal life. And we have believed and come to know that you are the Holy One of God” (John 6:68). And there’s the rub. To be a Christian is in one sense to be hooked. To be caught. There’s nowhere else to go. No wonder Our Lord first described those whom he would send in his name as “fishers of men”!

For this is the way we were always meant to go. And though the road may lead us, as it led Dante, through Hell and Purgatory, its end will be Paradise, union with God and each other. “Those,” says Jesus, “who eat my flesh and drink my blood have eternal life, and I will raise them up at the last day…   This is the bread that came down from heaven… Whoever eats my bread will live for ever” (John 6:54, 58).

O Lamb of God, that takest away the sins of the world: grant us thy peace!

And now let us confess our faith…