Thoughts on the Nativity of Our Lord: Text of a Sermon preached by Mother Julia Gatta in the Chapel of the Convent of St Mary at Midnight Mass 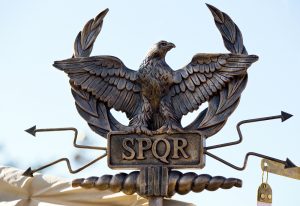 Saint Luke paints his nativity scene on a very wide canvas. He begins by solemnly invoking the Roman imperium: “In those days a decree went out from the Emperor Augustus that all the world should be registered” (Luke 2:1). It is within this sweeping landscape—universal to those experiencing it—that his story about the birth takes place. A personage no less than Caesar Augustus has some role in it. The registration or census taking he demanded was for the purpose of taxation; for Rome, like other ancient empires, placed heavy tax burdens on their subject peoples. Why not have the poor subsidize the rich, if you are rich and powerful? Mary and Joseph bend themselves in compliance to Caesar’s decree, just as a little later Luke would show them obedient to the weightier law of God when they have their newborn son circumcised and presented in the Temple. But for now, the imperial decree prompts their temporary migration from Nazareth in Galilee to Bethlehem in Judea. It turns out that Caesar, who imagines that he’s in charge of the “whole world,” is actually an instrument of God, pressing forward the divine purpose and direction. For it is in Bethlehem that the greatest “son of David” must be born. Caesar, all unawares, is in fact obeying a power far greater than himself. And this is not the last turn-around and upending at work in this tale of grace. It happens again and again in the nativity story, foreshadowing the great reversal at the end of the gospel, when death itself yields to life.

For all the majesty of his opening verses, Luke surprises us by describing the birth itself straightforwardly, plainly, simply. God enters the world quietly—not at all what we would expect: “While they were there, the time came for her to deliver her child. And she gave birth to her firstborn son and wrapped him in bands of cloth, and laid him in a manger.” That’s it. It could be said of any birth, anywhere, at any time—except maybe for the manger part. Swaddling, as I learned when my granddaughter was born, is still practiced. It keeps baby warm and snug, imitating the secure confines of the womb. So Mary’s a good mother, doing what generations had done for their newborns before her. This is how God makes his home among us—softly, without fanfare, no fireworks. The first witnesses to the incarnation of the Son of God are a young couple trying their best under constrained circumstances and, of course, the animals.

Not in the manger scene nor even in the town precincts of Bethlehem—where we might expect it—but in an outlying area of pastureland, there is an outburst of divine radiance, this time taking the shepherds by surprise. Why shepherds? Well, why not? Young David was shepherding his father’s flocks near Bethlehem when he was called to become Israel’s great king. And the newborn child would be great like his father David—and even more like the Lord God, shepherding God’s own flock, becoming their Good Shepherd. So to shepherds near this city of Bethlehem renowned for its shepherd-king, an angel appears, bringing with her the shimmering, overwhelming divine presence and power: “and the glory of the Lord shone around them.” This is the Shekinah, the transcendent divine glory, the holiest of holy presences. No wonder the shepherds were terrified. Yet the angelic message is reassuring: “Do not be afraid”—a word we will hear at key junctures throughout the gospel when human beings have every reason to be afraid, humanly speaking. But the angel comes with a message that does not originate with mere mortals. She brings a message from heaven itself. God has something to tell us, something to speak into our fear-filled situation, a word become flesh. It is news—good news—but truly news: something utterly new.

“To you is born this day in the city of David a Savior, who is the Messiah, the Lord.” It is a breathtaking announcement, and I doubt it did much  to alleviate—at least at first–the shepherds’ utter terror. It would take time to take it all in. The shepherds, like Mary, and like ourselves, would need to “ponder these things” in their hearts for a long time, indeed, for a lifetime. Consider the terms of the angelic announcement: the Saviour is here; he is born “for us”; and it’s happening “this day.” In a world governed by imperial edits or early morning tweets, the grace of God presses through with a power beyond this world’s imagining. It’s not the power of Roman legions or angry bluster, but the power—of what? The power of a baby utterly dependent upon his parents; the power of a child’s tender flesh; the power of total vulnerability. For behind this birth is the power of divine love: a self-emptying love that takes flesh and is born in this world; a love of crucifying availability that will finally lead to death; a love that will raise this mangled body and begin a new creation. Today is born for us this Savior.

The announcing angel proclaims this first word of gospel and there is an immediate reaction: not on earth, but in heaven. Celestial beings—a “multitude of the heavenly host”—burst into praise: “Glory to God in the highest heaven.” Doxology, spontaneous joy for the glory of God, fills the heavens and pours upon the earth: “and on earth, peace among those whom he favours.” Tonight we are caught up in the angels’ song. We can catch their ecstatic joy even more, because it is not for angels but for us that this saviour is born. The hardships of this world do not, of course, go away. Mary and Joseph are still dislocated, still pushed around, by forces outside their control, just as their son will experience much later in the story. But that is why he has come: to release us from the self-defeating diminishments human beings are ever devising, to free us from the crushing weight and distortion of sin; and finally to liberate us from death itself. So it is right to praise God tonight, letting the joy of the angels and the peace of heaven surround and envelop us.

Today he is born for us: today. One thing I have learned from my granddaughter is that for very young children, as for animals, it is always today. If we tell her, “Tomorrow we will do such-and-such,” she will ask us, maybe later that day, maybe a few days later, “Is it tomorrow now?” Time simply stops in the apprehension of the present moment. This experience of humans at an early stage of development is perhaps a glimpse of the wondrous eternity of God that becomes present to us in liturgy, in prayer, in fleeting moments of grace, catching us by surprise. It is the “today” when the scriptures, pondered in our hearts, leap into the present.

The Word of God seeks a place to be born. “The Word of God, who is God,” wrote St. Maximus the Confessor in the seventh century, “wills always and in all things to work the mystery of his embodiment.” The Word of God, who is God, thus seeks to be born in us. We take him in, in his scriptural word and in this sacrament, we let him be born—through labour, though self-giving love, through the same vulnerability as this Child we adore. “Be born in us today,” wrote Phillips Brooks in his famous hymn, “O Little Town of Bethlehem.” This day he is born for us. Tonight and every today may he be born in us, making us true children of God.