Saint Francis of Assisi: text of a Sermon preached in the Chapel of the Apostles by Mother Julia Gatta

“For I carry the marks of Jesus branded on my body” (Galatians 6:17) 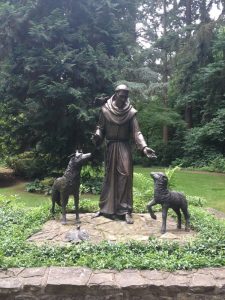 I must confess I have long enjoyed a rather acerbic comment that goes all the way back to the earliest editions of Lesser Feasts and Fasts: “Of all the saints, Francis is the most popular and admired, but probably the least imitated; few have attained to his total identification with the poverty and suffering of Christ.” “Probably the least imitated”! Well, Francis wouldn’t have cared one bit. He wasn’t at all interested in having anybody imitate him. He just wanted to imitate Christ. And few of us would want—or even should—imitate Francis in every respect. But we can let ourselves be inspired by him—by his single-minded, passionate and joyful devotion to Christ. That devotion led him to embrace poverty, to embrace lepers, to embrace the cultural and religious enemy—he did, in fact, cross behind the battle lines of the Fifth Crusade to preach the gospel to the sultan of Egypt. But what Francis embraced above all was the cross of Christ because Christ had embraced him. Francis could have said with St Paul, “May I never boast of anything except the cross of our Lord Jesus Christ, by which the world has been crucified to me and I to the world.” But how did Francis become so configured to Christ? How did this son of a prosperous Assisi cloth merchant—a pampered young bon vivant—move beyond himself to see and love Jesus?

Francis’ conversion seems to have come by stages. In his autobiographical Testament he writes very briefly about how it began: “When I was in sin, it seemed too bitter for me to see lepers. And the Lord himself led me among them and I showed mercy to them. And when I left them, what had seemed bitter to me was turned into sweetness of soul and body.” It seems that Francis’ conversion begins when he confronts his most visceral revulsion and fear, and Francis says that the Lord led him to that—how, we do not know. And typically, Francis discovers that imitating Christ by touching lepers—“performing the gospel life,” as one recent biographer puts it—leads to joy. What was previously bitter turns to sweetness for soul and body.

The next turn comes when Francis is praying before the large painted crucifix in the Church of San Damiano (which I have seen). As he prayed, the crucifix seemed to speak to him: “Rebuild my church.” Francis obeys to the letter. So besides caring for lepers, he now starts to collect stones to repair the crumbling edifice of San Damiano and other churches in the vicinity. Francis’s family, already alarmed at his eccentric behaviour, feels disgraced. People of their social class simply did not work with their hands. His outraged father insists on a showdown in the public square before the bishop of Assisi. But Francis surprises everyone by stripping himself naked, including even his underclothes, and hands them back to his indignant father, while the bishop covers him with his mantle. Francis’ break with his family and its mercantile values could not have been more dramatically enacted. As he steps out of his clothes, Francis puts on the naked innocence of Eden, but even more, the nakedness of Christ on the cross.

Two years later, on the Feast of St. Matthias, Francis hears the priest read the passage in the Gospel of Matthew where Jesus sends the Twelve on a mission of preaching and healing, instructing them to take but a single tunic with no money, belt, sandals, or staff. Not having the benefit of higher criticism, Francis again takes the words literally and, we might observe, out of context. But it somehow was the word of the Lord that Francis was waiting for: it gave him the direction he needed. He removed his shoes, discarded his staff, took off his belt and replaced it with a cord with which he tied his rough tunic. He would never again accept money, not even from begging. He began to preach a message of repentance. His lifelong love affair with Lady Poverty had begun.

It is important to realize that Francis was not the first person of his day to embrace a life of gospel simplicity and evangelical zeal. There were many movements of reform then at work in the church, especially since the late eleventh century, and numerous ordinary Christians as well as scholars pondered what “gospel living” or the “apostolic life” really entailed. Yet Francis embarked upon what he saw as obedience to Christ with such unreserved passion and infectious joy that he quickly drew others to his way of life. At first there were a few companions, then dozens, then the women with St Clare at their head, then devout lay people, and finally thousands of friars minor or “little brothers” across the span of Europe. St Seraphim of Sarov, a nineteenth-century Russian saint often compared to St Francis, once said, “Be at peace and thousands will find salvation all around you.” Not a bad mission strategy, when you think about it. Francis embodied such ardent love for Christ and Him crucified, such tender, practical love for the least of Christ’s brethren, all the while radiating a peace such as this world cannot give, that thousands simply wanted to be in on it—no matter the cost. And it cost a lot.

That cost came home to Francis with dramatic force during a period of retreat on Mount LaVerna, a place of solitude to which he would withdraw for weeks or months at a time. On the Feast of the Holy Cross in 1224, two years before his death, Francis saw a vision of a man with six wings like a seraph, but unlike the seraph in the prophet Isaiah’s vision, this one was crucified. Francis found the apparition both frightening and consoling. Shortly after this strange vision, Francis developed growths on his hands and feet that resembled nails, both front and back, and a wound in his side that bled. His closest companions who tended him in his illness could not help but notice, and scores of people saw these marks on his body after his death. For this reason, most modern historians accept the “stigmata of St Francis” as true, whatever their ultimate cause. Francis meditated on the passion of Christ daily, and lived into that cross by a life of severe penance and sacrificial service. If he carried on his body the marks of Jesus, the wounds of Christ had first been branded into his soul.

Yet the joy never ceased. Racked with pain and close to dying, he composed his ecstatic “Canticle of Brother Sun” within the next year, the first great poem in Italian. Its scriptural models should be evident to us, since we sing the psalms in the daily office that call upon creation to praise God as well as the exuberant canticle, the “Song of Creation” (Benedicite, opera omnia Domini) with its cosmic sweep. Yet Francis’ poem is no pale imitation of these antecedents as he addresses the heavenly bodies and the four elements of classical antiquity—earth, air, fire, and water. But what is he asking them to do? Our translation renders the Italian word “per” as “by”—and that is a legitimate option. In that case, we rejoice that all these creatures give praise to God by their very existence. But “per” can also mean “for.” And with that, we would be thanking God for all these blessings. Finally, “per” can mean “through,” conveying the profound sacramental vision of a world shot through with the divine presence. Poet that he was, Francis probably intended all three layers of meaning. Such a capacity for mystical joy in creation—for which Francis is justly famous—is of a piece with his devotion to the cross and his radical poverty. For it is only by self-emptying, after all, that we can see the world truly as creation, and its elements as kindred creatures—as “brother” and “sister.” By contrast, the nascent capitalism of his day, epitomized by the business mentality of Francis’ own family, sees water, air, animals, and minerals merely as “stuff”—resources that are there solely for our taking.

My sisters and brothers, we cannot—and probably should not—imitate Francis in every respect. He wouldn’t want us to. Like him, however, we are committed by our baptism to follow and obey Jesus as our Lord. We have been baptized into his death and resurrection. And by baptism we also carry on our bodies the sign of cross (our own version of stigmata) when we were sealed by the Holy Spirit and marked as Christ’s own forever—marked with the sign of the cross invisibly and yet indelibly traced on our forehead with chrism. That cross marks us as Christ’s own, and it makes all the difference.