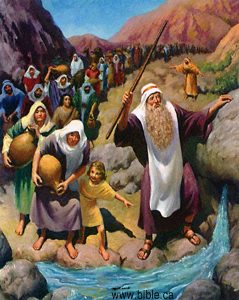 I’d like to day to spend a few minutes with you looking at the story from Exodus that was our first lesson—the story of that time in the desert when there was no water for the people to drink, and they were so angry with Moses that he thought they were ready to stone him.

“Is the LORD among us or not?”

Thus the storyteller sums up the Israelite’s fury.

“Is the LORD among us or not?”

Now of course the dominant testimony of Exodus and indeed, of the Bible as a whole, is that God was among them: always in Israel’s midst, guiding her and delivering her. But it is a part of the honesty and candour of Israel’s Scriptures that alongside that dominant testimony there runs another testimony—what Walter Brueggemann has taught us to call a countertestimony. And the countertestimony, simply put, is this: that it didn’t always seem like that.

One of the most disappointing moments for me in Brevard Childs’ always learned and sometimes wise commentary on the Book of Exodus is his discussion of this particular story. The whole point of it, he tells us, “turns on the gracious and surprising provision of God who provided water for his people when none was available.”[1] Really? The whole point? That certainly wasn’t how the Psalmist saw it in Psalm 95. The Psalmist saw it as a story about Israel’s heart being hardened, about rebellion. And although the Psalmist exhorts us to avoid such rebellion, even he doesn’t say there was no reason for it. And surely even a child listening to this story could see—and perhaps see better than a learned and pious biblical scholar determined at all costs (even at the cost of common sense) to defend God’s honour—surely even a child could see that one point of this story has to be that if God was guiding Israel through the wilderness—and let us note that the biblical text is very careful to tell us that it was “at the LORD’s command” that the people moved on “by stages” and so came to Rephidim where there was no water—then it was God who had got Israel into this mess, this situation where the children and the animals were dying of thirst. And it was that—not the provision of water from the rock, but the lack of water—that had led to the question, “Is the LORD among us or not?”

Certainly there was much in Israel’s life and history that was congruous with the lofty claims she made for her God. But there were also moments in her life as in ours when it looked as if God was letting her down, moments when life was inscrutable, moments when there seemed to be no connection, no match, between faith’s claim that God is faithful and God cares, and our actual experience. And it is one of the glories of our Scriptures that they make no attempt to hide this fact.  “O God, why have you utterly cast us off?” the Psalmist asks bitterly, “And why is your wrath so hot against the sheep of your pasture?” (Ps. 74.1). The prophet Jeremiah cries out: “Ah, Lord GOD, how utterly you have deceived this people and Jerusalem, saying, ‘It shall be well with you,’ even while the sword is at the throat!” (Jer. 4:10). And Our Lord himself upon the cross seems to despair: “My God, my God, why have you forsaken me?”

So my response to Brevard Childs’ commentary on this passage is this—Yes, it is in a sense true that the point of the story is the gracious and surprising provision of God, just as it is true that the point of the passion narratives in the gospels is the resurrection of Our Lord. But just as it is false and unfaithful to imagine that we, or even our Lord Himself, could come to Easter Day without going through Good Friday, so it is false and therefore unfaithful to deny the real experience of loss, confusion, and uncertainty that are expressed in this morning’s story as a whole, and in particular in the question that the narrator himself apparently sees as summing up the whole affair, “Is the LORD among us or not?” And it is equally false, and therefore unfaithful, however well or piously intended, to deny that there are times when we too share those feelings.

Lent—the spring season, the season of renewal and rethinking—is surely the right time to remember this. And perhaps never more so than this Lent, when so much seems to have changed for the worse from what we hoped for or even took for granted in Lent of 2016. I speak not merely of our personal lives and journeys, which inevitably have their downs and ups, their moments of darkness as well as of light. I speak rather of the world around us, of the state of society at large. Many among us are troubled and anxious by the way in which in this country and in Europe institutions and progress that twelve months ago we regarded as secure are suddenly under threat. Structures designed to prevent another European war are being recklessly undone; progress in bringing justice to the disadvantaged and in protecting our fragile environment is being reversed; honourable purveyors of real information and honest critique are openly reviled and insulted, while manifest liars are honoured, and our leaders openly rejoice not in truth but in “post-truth”—that is, in lies—plainly wanting us to forget that it is only the truth that can set us free. And all while spineless politicians who surely know better simply acquiesce. More than once in the last few weeks someone has quoted to me W. B. Yeats’ prophetic poem “The Second Coming,”

Mere anarchy is loosed upon the world,

The blood-dimmed tide is loosed, and everywhere

The ceremony of innocence is drowned;

The best lack all conviction, while the worst

Are full of passionate intensity.

At which point on a Sunday morning one’s natural desire is to offer some word of consolation, to point to some sign that things are not really so bad as they seem. “Look here! Look there! See! God is working his purpose out, after all!” Or alternatively to offer some word of explanation, such as the hymn writer’s,

The flame shall not hurt thee. I only design

Thy dross to consume, and thy gold to refine.

—a thought that I suppose just about might seem satisfactory in connection with such ordinary trials and tribulations as come to all of us from time to time, but which when considered in light of the thousands of children who are at this very moment being killed, maimed, and traumatized in Syria, simply will not do.

All of which is a way of saying that the desire to console or to explain may actually in this particular case be a temptation to apostasy. Let us remember that according to Jeremiah it is false priests and false prophets who cry, “Peace, peace, when there is no peace” (Jer. 6.14, 8.12). So perhaps our Lenten call in 2017 is precisely to live with the enigma, with the silence, with the hiddenness of God. That is what the Israelites were called on to do in the wilderness when there was no water. That is what Our Lord was called on to do on Good Friday when it seemed that God had forsaken him. That is what thousands of Christians in Syria and Iraq and Africa are called on to do at this very moment in the face of persecution, violence, and lawlessness.

Of course we must continue to try to do our duty: to do justice and love mercy and walk humbly with our God, in whatever ways those general duties may present themselves to us in the ordinary course of our lives—but perhaps we must be willing to do so for no other evident reason and with no greater encouragement or consolation than this: that despite everything, these still seem to be the right things to do. And perhaps it is true, as C. S. Lewis claimed, that God is never more glorified, nor are we ever in this life closer to the divine glory, than when we look around us at a universe where the heavens are as brass and from which every trace of God’s grace seems to have vanished, and still obey.

In which conviction, like Abraham as St Paul described him, “hoping against hope” (Rom. 4:18), let us then confess our faith as the church has taught us.